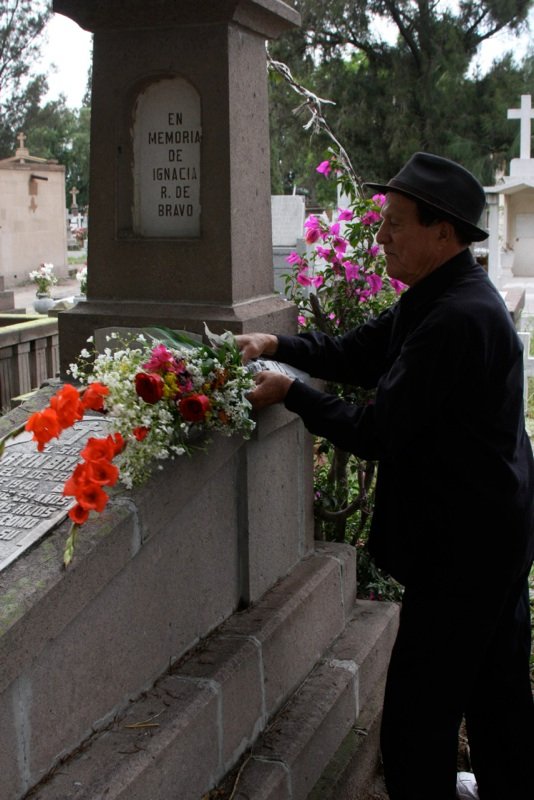 When I woke up this morning, I had planned to spend the day working on some design projects that I had on my To Do List. But that was my plan. God apparently had a different plan for me…

I started off the day by going with my Dad to the Saucito Graveyard to visit his Dad, Mom, and Sister along with a couple of other relatives. Before we entered into the graveyard, my Dad said he wanted to stop by the flower stands that were just outside the gates of the cemetery. As we approached the row of flower stands, that’s when my lesson on “Negotiation” began:

[English Translation…]
“You see this first stand?” my Dad said as we approached, his voice increasing in volume.
“This is the stand I always go to, but they’re constantly ripping me off!” he states loudly.
“The last time I came, they ripped me off, the time before that, they ripped me off too!”

“How can we help you, Sir?” they said with a smile.
“No! I don’t want to buy from you guys… Just because you are the first stand in the row, you guys get the most business and so you always try to rip everybody off!” he stated angrily.
“The last time I was here, I paid for five bouquets and I only four! I had to leave one headstone with nothing!” he ranted.

At this point, I was standing a behind my Dad, thoroughly entertained and a little embarrassed. One of the ladies caught me chuckling to myself and gave me a smile as though this wasn’t the first time my Dad had been by this stand…

“Sir, I have five bouquets for you right here for five dollars” the florist said.
“Five?! That’s what you told me last time too!” my Dad responded, his tone softening.
“Ok, how about seven bouquets for five dollars?” the woman said as she began cutting the stems and wrapping the flowers.

At this point, my Dad pulled out his wallet and started counting out money. As he went to hand over the money, he nicely said “I really think you should make it eight bouquets to make up for all the times you ripped me off in the past.” And she did… Negotiation 101.

It was really nice to hang out with my Pop in his hometown. We took buses the whole way (as opposed to a taxi) and even stopped by the prickly pear stand for a snack. Sitting there in front of the Saucito Church eating from the prickly pear stand with my Dad is one of those moments I will cherish for the rest of my life… Just like when me and my Dad were sitting on the steps of the Vatican in Rome together. I’m not sure it gets any better : )

After returning from the cemetery, I went to play basketball with my cousins Jorge Luis, his son Ahmed, and Armando. Though neither of them had played in quite a while, Jorge Luis didn’t miss a three point shot all day and Armando was lethal from inside 18 feet. Though they made me work hard, I was able to hold them off and walk away with a flawless record. Thank God, the rain ended our set when it did because I didn’t have much left when we quit.

This evening, Jorge Luis, Ahmed, Armando and I all went to a Bible Study at the Baptist Church they go to… It turns out that it was a study for all of the small group leaders within the church and that Armando was the instructor. Unbeknownst to me, after the pastor opened the session in prayer, he called me up to the pulpit to give a testimony of all that I had learned from my mission trip! As if it wasn’t enough that I was caught off guard, I had to give this testimony to a group of thirty people IN SPANISH!!! That said, everything went well… Proof once again that God can use you, no matter how broken, how sinful, or how terrible your Spanish is! : )

Overall, this day is one for the record books!